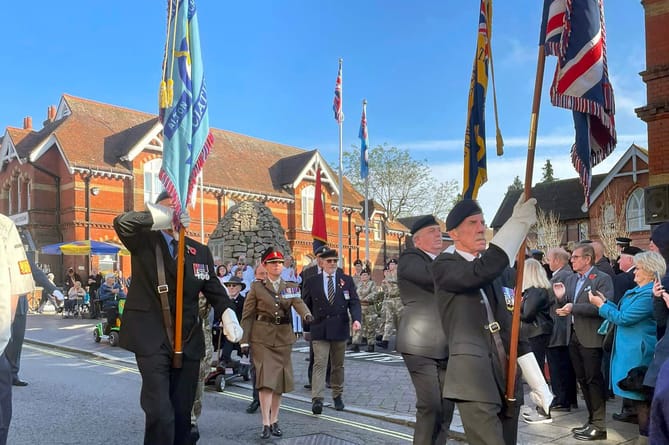 For the first time since 2019, the Alton Remembrance Sunday event took place with a full parade and a Chinook fly-past.

The service was led by Rev Andrew Micklefield at the Cairn War Memorial in the High Street.

Those unable to attend in person could watch it through a live stream on social media and it was also broadcast live on Wey Valley Radio.

Veterans of all ranks from the armed forces were invited to parade from Market Square to the Cairn and were accompanied by the Royal British Legion, serving personnel, Army Cadets, the Air Training Corps, Hampshire Constabulary, Hampshire Fire and Rescue Service, the Boys’ Brigade, the Girls’ Brigade, Scouts, Guides, Explorers, Brownies, Cubs, Rainbows and Beavers.

Alton town mayor Cllr Ginny Boxall led the dignitaries in laying a wreath on behalf of the town.

A Remembrance Service was held at Alton School on Armistice Day as a tribute to all those who served and sacrificed their lives for their country.

Led by the school’s Combined Cadet Force cadets, it comprised prayers, hymns, readings and two minutes’ silence at 11am.

A spokesperson said: “A sense of unity and pride filled the air as students, staff, parents and governors remembered those who gave their lives in war.

“The school was left in no doubt of the sacrifices that so many men and women have made.”