Dick and Dom bring TV show to the stage in Woking 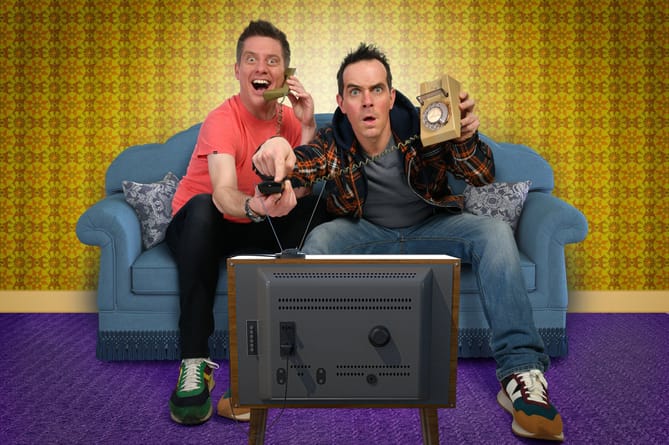 To celebrate 20 years since cult hit television show Dick and Dom in Da Bungalow hit the screen, quadruple Bafta award winners Dick and Dom will be appearing to the New Victoria Theatre in Woking on October 14.

The live show promises to bring back the spirit of Da Bungalow with their family-friendly anarchic style and content as it was in the original series.

This interactive experience will include all your favourite games including two-word tango, musical splatues, the grunty song, fairly hairy fizzogs, pants dance, what a sweaty flap and, of course, bogies. And for their finale, expect to watch participants being splattered in their legendary Creamy Muck Muck game.

There will be appearances from Diddy, Dick and Dom, and DI Harry Batt with his interrogation game, as well as giving audience members the chance to win part of, some of, or almost all the price of their ticket.

Dick and Dom in Da Bungalow started on CBBC on August 31, 2002. After one series, the audience had grown from one kid eating her cereal in Stockport to hundreds of thousands of fanatical viewers screaming “bogies!” at the top of their lungs.

The show has many celebrity fans, and participants – or victims – of the show include Fearne Cotton, Adam Woodyatt, Chris Moyles, Tom Fletcher, Sara Cox, Will Mellor, Rupert Grint and Rachel Stevens, who legged it as she didn’t want to get dirty.

As well as In Da Bungalow, they have presented The Sunday Morning Show on Radio 1 and Are You Smarter than a Ten Year Old? for Sky 1, as well as having starring roles in the hit film Horrid Henry: The Movie.