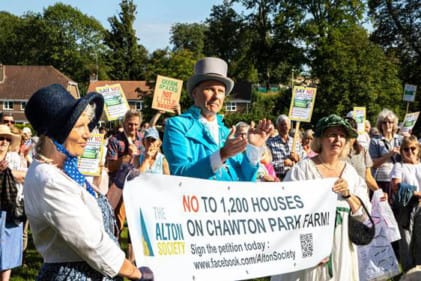 Carol Palmer of The Alton Society organised the Jane Austen Regency-themed peaceful protest on The Butts green in Alton on Saturday.

"The Victorian road bridge needs to be rebuilt, so they will have to fund a lot of Section 106 money to do that, which means they will negotiate with the council to reduce the number of affordable homes.

"This will mean it’s a completely lose-lose situation for the people of Alton, because the children won’t be able to afford the houses and the population won’t have that beautiful valley to walk through any longer."

A total of 2,263 people had signed a petition against the plans by 1pm on Saturday, and about 300 turned up for the protest.

Rufus Flack of Alton Runners said: "Alton Runners use the access to Chawton Park Woods every week. Access allows runners of all abilities to train there and we’re lucky to have it on our doorstep.

"People come along to running sessions not only for physical health but also mental well-being.

"Access to the countryside is hugely important, not just for runners but also hikers, cyclists, dog walkers and families. There is no price we can pay in the future that will undo destruction of the countryside around our town."

Chawton Park Farm is close by the picturesque home of Victorian author Jane Austen in Chawton village, and the district council says the new homes are needed to help meet the government’s housing target of providing 11,000 new homes locally by 2038.

East Hampshire District Council members are to debate the proposal as part of a wider plan looking at potential development sites across the district tomorrow (Thursday) at 6pm.