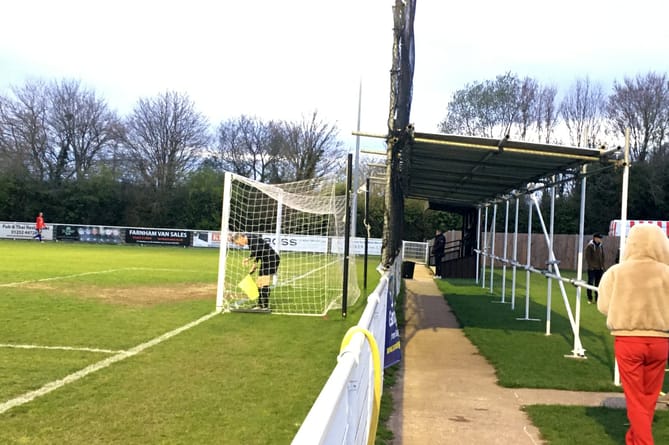 High winds brought down the netting behind a goal at Badshot Lea – and while work is going on, it provides cover for supporters...

BADSHOT LEA have amassed their highest-ever points total as they continue to impress in the Combined Counties Premier Division South.

They eased to a 3-0 victory over Guildford City on Tuesday night to move to 69 points.

It came after a tough week for the Baggies as they slipped to defeats against Camberley and Frimley Green.

But they go into Saturday’s trip to Jersey Bulls with renewed confidence.

Co-manager Gavin Smith said: “The past week has been tough for us – and my own worst experience of management, because we know what the lads can do. It’s not about ability, it’s about getting a bit of confidence.

“I looked back at the games and when we played Camberley we should have gone ahead, didn’t and lost, and it was the same last Saturday against Frimley Green. We had a lot of possession and they scored a very good first goal – it was a good move which earned them a penalty.

“From then on their tails were up and we lost our confidence a bit – and they scored two more good goals.

“They played the conditions better than us and we didn’t create anything – we just didn’t look dangerous.”

But the Baggies were back to their fluent best on Tuesday when goals by Nic Ciardini, Mal Thomas and Danilo Cadete clinched the points.

Smith said: “It helped to have James Smith and Nick Medcraft back as we have had a lot of success with the full-backs moving up with quality, and they made the difference.

“The players came out of the game with a lot of credit, there was a lot more intensity about us.

“We played well and without being too critical we probably missed about six good chances – their keeper made a couple of good saves.

“I was pleased for Mal – it was a great finish.

“We are going to Jersey with a bit of confidence – and we want to finish as high up the league as we can, and they are our direct rivals in that.

“If we finish fourth this season, that would be brilliant – and I don’t want to finish any lower than fifth.

“If we can carry on picking up points it’s going to be a good season – and we have a cup quarter-final to look forward to next Tuesday.”

It promises to be a tough game – Villa are running away with the Combined Counties Premier North title, winning 28 of their 32 league games, and drawing the other four.