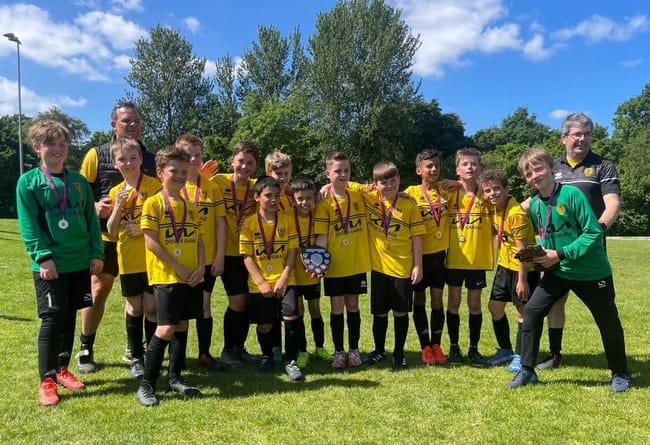 Sunday, May 22 will go down in the history of the Churt Junior under-11 squad as a quite unbelievable day of football.

All three teams were finalists in the North East Hampshire League Under-11 Conference Cup at Frimley Lodge Park.

Each side had beaten as many as ten junior teams from all across the region – covering Surrey, Hampshire and Berkshire – to secure their places the finals.

Each match had its nail-biting moments.

The Tigers earned an early lead against Mytchett Falcons, and remained dominant to win 6-3.

It was a tense final ten minutes, though, as the Falcons rained shots at the Tigers’ goal, reducing the deficit and bringing the scoreline worryingly closer and closer.

Coaches Neil and Simon said: “The boys kept their cool, held their nerve and fought hard to keep the ball away from goal, before finishing victorious at full-time.

“Every single boy put in a massive effort and absolutely deserved the win, particularly given how much hard work they have all put in over the winter months.

“Each one of them was superb and we couldn’t be prouder.”

Churt Panthers then kicked off in the midday heat against Curley Park. They started fast with a lot of excellent possession that led to threatening moments but it took a set piece to unlock Curley’s defence as Churt scored at the near post from a corner.

The game remained competitive and in the second half Churt got some reward for their possession with a bullet of a strike that beat the impressive Curley defence.

Curley Park were an incredibly competitive and hard-working group of players and their keeper particularly produced a great performance, but the Panthers secured a 2-0 victory.

Coach Jimmy said: “We’d made it to three finals and walked away winners only once, so we know how hard it is when you don’t win.

“Credit to Curley as they played very well but I was impressed with how we controlled the game and thought we deserved the win.”

The Churt Lions’ match was tense from start to finish, and it remained goalless until the last six minutes when Tadley scored the winner.

It was agonising for the Lions but the players left with their heads held high, having won their previous league cup final in January 2022, and now being finalists following a league promotion.

Coaches Vinny and Matt said: “The lads put in maximum effort and played with heart.

“They’ve had an amazing season and we’re super proud of each and every one of them.

“All in all, it was an outstanding day for the Churt under-11 junior football squad – and congratulations for bringing the cups home again!”