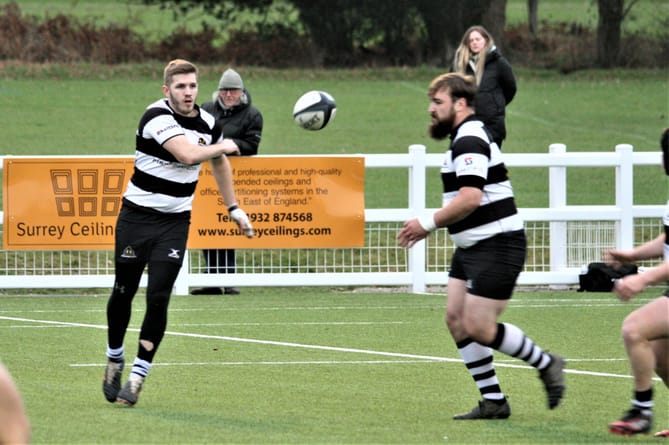 Cobham kicked off and the Farnham forwards rampaged taking the ball back deep into Cobham’s half. The ball was released to the Farnham half-backs who moved the ball quickly to Toby Salmon.

He chipped over the upcoming Cobham defence and regathered after a kind bounce, evaded the defence and was brought down a yard short just in from the left-hand touchline. Salmon had the awareness to offload from the ground to Reece Stennett, who touched down to score. The conversion was successful.

From the restart, debutant Tom Brooker burst through the defence to take the ball back into the Cobham half.

Farnham Vets win at London Irish thanks to family trio

Cobham conceded the penalty at the ruck and Farnham’s fly half, Matt Farnes, found the left-hand touch ten yards out.

The catch and drive moved the ball to centre-field, yards closer to the line where Cobham conceded a second penalty. This was sent to the right-hand touchline for the line out where, caught by Ben Adams, the ensuing maul drove short of the line. Two more phases of pick and go had second row Harrison Horner within inches of the line from where hooker Ben Brown picked and dabbed down to score his first try of the season.

The conversion attempt was missed, but Farnham led 12-0 after eight minutes.

Farnham’s organisation let them down at the restart and they conceded a penalty in front of the posts, 20 metres out, which Cobham duly converted to make it 12-3.

The Farnham restart kick went deep into the Cobham half where the home team infringed under the pressure from the rampant Farnham pack. Following the kick to the corner, Ben Adams again took the ball from the throw and this time dropped it into the arms of No 8 Oscar Henderson who broke through to score. The conversion made it 19-3.

Farnham exited successfully from the restart, but Cobham attacked with a number of passes and offloads to take the ball up to the Farnham try line on the far right of the pitch. Quick ball from the base of the ruck released the Cobham ten to score under the posts. The conversion made it 19-10 and the game was in the balance.

There followed 20 minutes in which both sides put a number of promising phases together, but these attacks ultimately failed with penalties awarded for the full range of offences. Towards the end of the half, Farnham seized their opportunity for another score.

A Cobham attack ended with a Farnham penalty which was kicked to the left-hand touch in the Cobham half. The ball was taken cleanly from the lineout and put through the hands of the backs. A fine run from Tim Salmon broke the defensive line and as the cover defence arrived, he offloaded to Harrison Horner. Horner found himself with no one in front of him and sauntered the 15 yards to touch down under the posts. The conversion made it 26-10 at half-time.

The second half saw changes to the Farnham pack. Sam Woodhams replaced Matt Chapham on the flank and Marco Azevedo was on for Connor Hayes in the front row.

Farnham were almost in for a score from the kick-off.

The Cobham clearance from a deep kick was charged down and in the scramble, Cobham knocked on. Farnham won a penalty at the scrum and went for touch. The lineout routine was good, yards were made and the backs released.

Toby Salmon tipped forward the long bouncing pass from brother Tim and the attack halted. However, the referee was playing advantage from an earlier Cobham knock on and from that scrum, Henderson picked from the base and drove for the line only to be tackled into touch inches short. Cobham then cleared their lines.

As the fourth quarter of the match began, Cobham started to look dangerous. The Farnham defence had to go into overdrive to repel a number of attacks deep in the Farnham half. However, from a midfield scrum, Cobham moved the ball out quickly allowing their centre to cut back. He was stopped five yards out but was able to offload from the ground to his supporting fly-half who went over to make it 26-17.

Almost immediately from the restart, Farnham conceded a penalty on their ten yard line which Cobham duly converted to make the score 26-20.

For the next ten minutes Cobham threw everything they had at the Farnham line, but the defence held firm until yet another penalty infringement gave Cobham the chance to attack from a lineout five yards out. Cobham caught and drove and at the fifth attempt battered over the line wide out on the right. The conversion was missed, and with less than ten minutes to go it was 26-25.

Henderson stole the ball at the restart and from the following ruck, Cobham conceded a penalty which Farnham put into touch on the Cobham 22. Following the catch and drive, Farnham’s captain and scrum-half Ollie Brown was judged to have been tackled high. Turning down the chance for three points, Farnham kicked to touch. The quick, short throw went awry and the ball was knocked on.

In the ensuing minutes Farnham tried everything to keep Cobham in their own half. However, with a minute to go, Cobham battled up field.

At their line out on the Farnham 22-metre line, they kept the ball and drove infield. The Cobham scrum half zipped the ball from the base of a ruck to their fly half who neatly drop kicked the ball through the posts for a three-pointer.