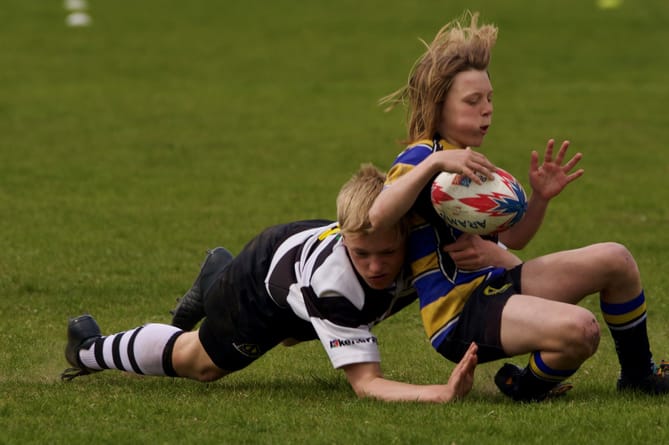 FARNHAM’S junior sides travelled the length and breadth of the county to compete in the finals of the Surrey RFU’s Waterfall Cup competition last Sunday (April 24).

The under-13s led the boys’ charge with three teams – the Blacks, the Whites and the Maples competing in their age group at Old Cranleighans RFC. Farnham Blacks were runners-up in the Waterfall Cup final with a narrow 4-3 loss to Barnes A. The Farnham Whites won the Waterfall Trophy beating Old Rutlishians A 9-1, while the Farnham Maples beat Reeds B 7-6 to secure the Waterfall Plate.

The girls’ under-15s played their Waterfall Cup Final at Cobham against a combined Cobham/Dorking team. The opposition started strongly, scoring two tries before Farnham hit back with a try from Hattie. However, Cobham scored again and it took a long distance try from Polly to keep Farnham in the game, going into half-time 19-14 behind.

The Farnham girls stepped up in the second half. Aggressive defence combined with strong scrummaging and running with the ball led to 31 unanswered points. There were tries from Mimi and E-J, and another three tries from Hattie. Phoebe converted five tries as Farnham won 45-19.

The girls’ under-18 Hawks played in their Waterfall Cup Final against a combined Cobham/Warlingham side. Farnham scored some excellent tries in the first half to lead 33-5 at the break. The second half started with the same intensity and Farnham ran out 59-5 winners. Rebecca Johnston (2), Holly Thompson (2), Molly Tebutt, Tilly Poland, Rosie Peet, Iley Bailey and Maddie Healy scored the tries.