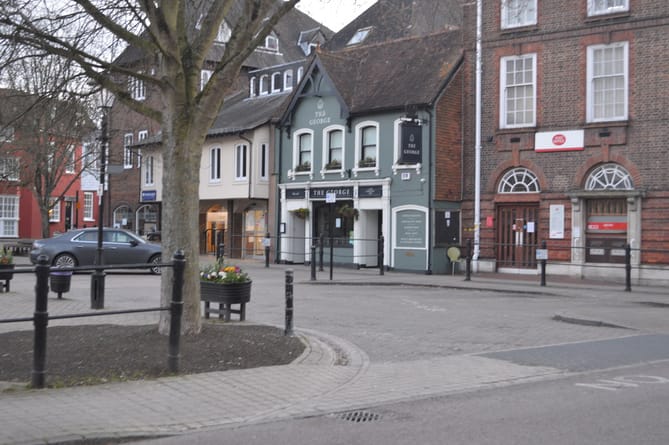 The George pub in The Square, Petersfield (Martyn Pattison )

A MAN in his 20s has been left with serious head injuries after being attacked by a gang of five men in Petersfield in the early hours of Saturday morning (April 9).

Hampshire Police is appealing for witnesses after the assault at around 1.30am in Chapel Street, and have already arrested a teenager on suspicion of causing grievous bodily harm (GBH) with intent.

Officers believe the incident followed a disagreement in The George pub in The Square earlier in the night, at around 11pm on Friday, April 8, involving one of the group and the victim.

A police spokesman said: “Officers are carrying out enquiries in the area. to speak with anyone who can assist our enquiries or who knows anything about the group.”

Motorcyclist killed in three-vehicle crash on the A32 near Alton

The group are described as being all around 20 years old, white, of slim build and between 5ft 5ins and 6ft tall.

One of the group was wearing a black puffer jacket, dark blue denim jeans, and white Nike Air Force trainers.

Two had on black jackets or tops, with one wearing a balaclava over his face and one had on a face mask.

A 19-year-old man from Petersfield has been arrested on suspicion of GBH with intent, and remained in custody as of 3pm Sunday.

Investigating officer DC Thomas Bailey said: “This incident has led to a man suffering a serious head injury and we are determined to identify those who caused this.

“I am certain that someone in the community knows who was involved in this incident and I am appealing to anyone with information to get in touch.

“Regardless of how small a detail you think something may be, it could be important to our investigation, so please do not hesitate to let us know.”