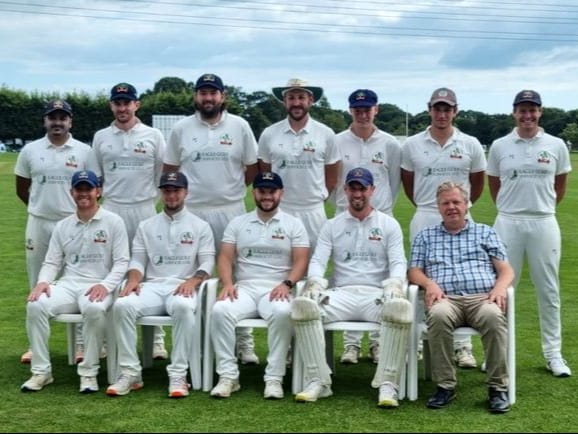 Liphook line up for the camera (Tindle )

Liphook & Ripsley fell to their third defeat in four games as they went down by four wickets to New Milton on Saturday.

Sean Burton once again won the toss and decided to bat first. Royal Grammar School pupil Henry Amis made his first appearance for Liphook this season thanks to half-term, and he opened the innings with Ryan Covey.

But the youngster was unfortunately on his way back to the pavilion in the second over, after he was caught in the slips off New Milton stand-in skipper Toby Edwards without troubling the scorers.

Harry Munt once again joined Covey early on and set about rebuilding the innings.

Runs were very hard to come by for the pair as New Milton had a clear plan of where to bowl and set their fields accordingly.

The score reached 69 before Munt was caught for 31.

George Neave and Covey took the score on to 100 but once Neave was bowled, the game began heading in New Milton’s favour.

A score of 100 for three quickly became 126 for seven as the spin bowlers of Joe Hall and James Adams ripped through the Liphook middle order – but all the while Ryan Covey was still there, the game was still alive.

Covey passed his 50 with a very patient innings but the scoring rate needed to increase with only ten overs to go, and he and Dan Harvey set about upping the run rate.

They raced the score on to 180 before Covey was finally dismissed for a very well played 81 off 131 balls.

Liphook managed to get to 197 before they were bowled out in the final over.

There was a great cameo from Harvey, who hit a run-a-ball 22.

The hosts’ bowling and fielding was superb and leg spinner Adams was the pick of the bowlers, taking four for 34 off his ten overs.

Liphook were in need of some quick early wickets and they made the breakthrough when Joe Randall had Ryan Beck caught at point for seven.

Charles Janczur then picked up his first wicket of the season as he had other the other opener, Adams, caught at slip to make the score 29 for two. However, an 80-run third-wicket stand between Ben Griffiths and Lee Beck took the game away from Liphook.

A steady innings from Griffiths (30) coupled with a blistering knock from Beck (54) took them to within 90 runs of the Liphook total.

Both batsmen fell but in came skipper Edwards, who won the game for New Milton, smashing an unbeaten 61 off just 42 balls.

Liphook did manage to pick up another couple of wickets but it was in vain as New Milton won by four wickets.

The wickets were shared around between the bowlers as Covey picked up two, and there was one each for Janczur, Randall, Munt and Harvey.

Liphook know they will need to improve with the ball if they are to have a successful season.

They will be looking to bounce back on Saturday when they entertain fellow strugglers Sparsholt.