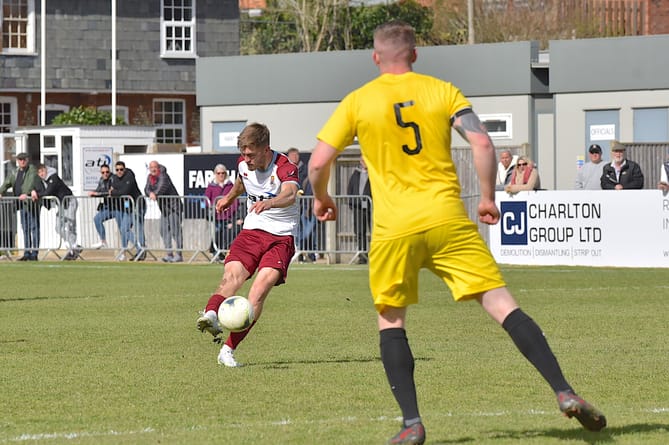 FARNHAM TOWN have now formally begun the process of finding a new manager.

After the exit of Tony Reid – and no-one at the club is talking about that yet – the new interim management team of Roger Steer, Dan Goodall, Tristan Rees and Chris Adams got off to a fine start.

They were in charge for the fine 3-1 win against Cobham.

In the job advert, Town say the new manager “will be expected to develop a first team capable of delivering the results required to maintain our progress and achieve our long and short-term objectives”.

They will be looking for someone with a track record of success at Step 5 and, ideally, a higher level football in England.

The advert continues: “Having gained promotion to Step 5 last season, Farnham Town have consolidated their league position and are now looking to become a competitive force pushing for promotion.”

Applications must be submitted by April 28 and Town say they are “anticipating significant interest” in the role.

Steer was delighted with the application the players showed in the Cobham win.

Steer has been involved as a non-league player, manager, coach and director of football for the past 50 years – he worked with Reid at Westfield – but isn’t interested in the role full time.

“We are here until the end of the season and want the club to finish on a high,” he said.

“I couldn’t have asked any more of the players on Saturday.

“In the first half we should have scored five or six although, to their credit, Cobham came right back into the game after the break.

“The players Tony brought to the club are staying on to the end of the season and will wait to see what happens at Farnham before deciding what to do next.

“Our job is to keep winning games.

“Knaphill will be interesting on Saturday as they have so many of our former players there and we know Badshot Lea will be tough on Monday.

“There is a lot of respect between the two clubs and they are going very well. We don’t see it as a free for us at all – we are going out with the attitude to win every game we play. We want to finish on a high.”